A sports car is synonymous with 'expensive', which is the primary reason why many of us believe it to be beyond an acceptable range of budget. This WheelZine article gives you a list of the best affordable sports cars available today. 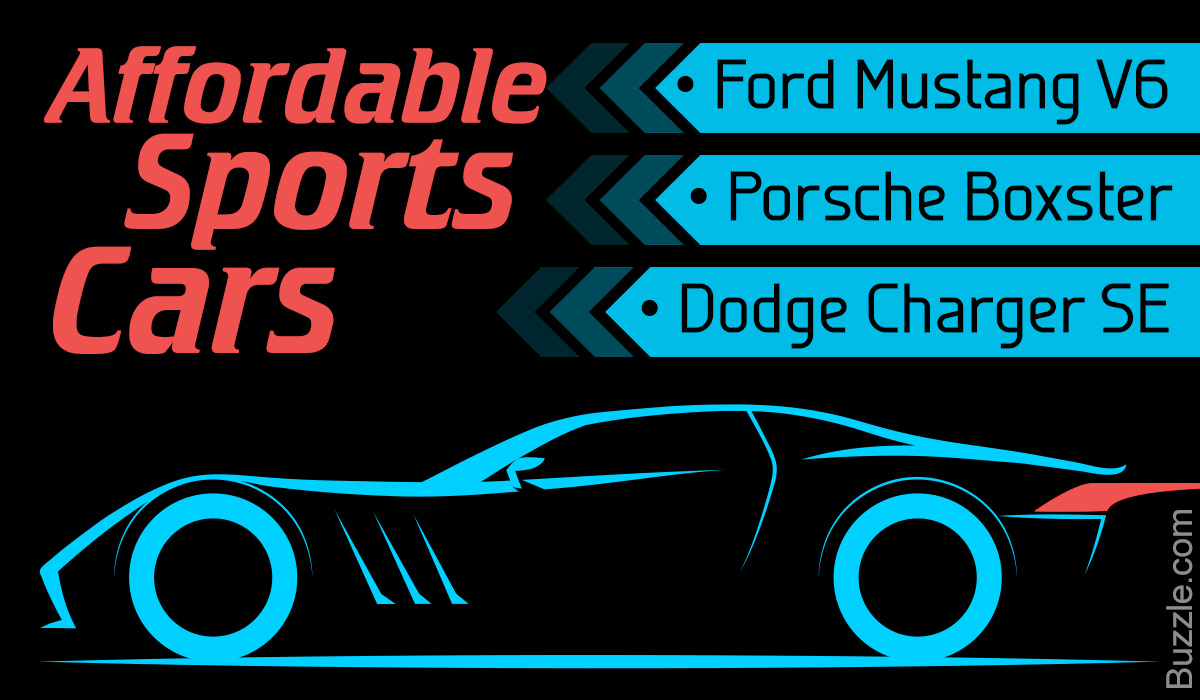 A sports car is synonymous with ‘expensive’, which is the primary reason why many of us believe it to be beyond an acceptable range of budget. This WheelZine article gives you a list of the best affordable sports cars available today.

It is generally believed that sports cars come at a price that is beyond the means of common people. But there are some companies who have come up with high-performance sports cars at an inexpensive price, to make a good reputation in the car market. Companies like Subaru, Dodge, and Ford are renowned to produce the best-in-class performance models, albeit at affordable prices. Most of these sports cars can be used for street and rally racing.

This is one car that has been present in the auto world for many years now. Previous generations of the Camaro represent the muscle car legacy of Chevrolet. This car is most suitable for road racing, owing to power and style. The 2015 1LS version of the coupe is available at a base price of just about USD 24,000. Its 3.6-liter V6 engine with 323 hp surely gives a remarkable performance. Moreover, the six-speed manual transmission adds to the thrill of controlling the car as you like.

The Dodge Charger is another muscle car which is being used from years. It is one of the best muscle cars from the Dodge marque in the car market. The SE variant of the Charger is priced at approximately USD 27,000 which is affordable for many sports cars enthusiasts. Along with a good price, a mileage of 18 MPG in city and 27 MPG on highway makes it a good package. This trim level comes powered with a 3.6-liter V6 24-Valve VVT engine with a performance of 292 hp. Its Electronic Stability Program (ESP) is pretty efficient, which is why it is rated at a good safety level by the Insurance Institute for Highway Safety (IIHS) and National Highway Traffic Safety Administration (NHTSA).

You can say that the Ford Mustang is a complete package of manly looks, style, power, acceleration, and even mileage. Its base V6 variant is priced even lesser than the Camaro, at about USD 24,000. Besides, a mileage of 19/31 city/highway makes it an ideal car for everyday use. There is a 3.7-liter V6 engine with 300 hp and a 6-speed manual transmission gearbox. It also boasts of the AdvanceTrac with Electronic Stability Control (ESC) system.

Mitsubishi Eclipse does not at all look like a muscle car. Instead, it gives out an appearance of a true contemporary sports car. It is considered to be the hottest inexpensive sports coupe in the market. Its base price point of only about USD 21,000 is the main attraction. The GS is incorporated with a 2.4-liter 162-hp 4-cylinder MIVEC engine paired with 4-speed Sportronic automatic transmission. If you want to drive it on rough roads, you can depend on its Active Stability Control with Traction Control (ASC), ABS, EBD, and a lowered sport-tuned suspension.

This is another car from Dodge which has a conventional muscle car look. Its exterior styling is more like the cars from the ’70s and ’80s. At a starting price of USD 27,000, the SXT variant is not at all a bad deal. This car is powered by a 3.6-Liter V6 24-Valve VVT Engine , generating a decent 305 hp of power. Considering the retro style, power, and most importantly the price; this car definitely ‘challenges’ other vehicles in its class. Moreover, the brand has also focused a lot on safety features; as a result All-Speed Traction Control and Electronic Stability Control are included as a standard.

It seems that Subaru’s engineers really know how to make sports cars for off-roading purpose. This can be said by the fact that all Subaru vehicles (US Models) come with the Symmetrical All-Wheel Drive trademark. This is probably the best AWD sports car for rally championships on tough roads and terrains. The WRX is available in a four-door sedan or a five-door hatch. It has a 2.5-liter turbocharged SUBARU BOXER 4-cylinder engine which renders 265-hp. The configuration also consists of a 5-speed manual transmission gearbox, Brake Assist System, and Vehicle Dynamics Control (VDC) which includes Traction Control System (TCS).

Hyundai is renowned all over the world to produce small and compact cars. However, they have also made their presence felt in the performance car market with the Hyundai Genesis Coupe. This variant has a 2.0-liter turbocharged 4-cylinder DOHC engine that supplies 210 hp. It is fitted with a 6-speed manual transmission gearbox. With a mileage of 21 and 30 MPG on city and highway roads, it is also considered as an economical coupe. The 2.0T variant of the Genesis starts at a base price of about USD 27,000.

This is a sports car that shares much of its exterior with that of the Eclipse from Mitsubishi. It has a massive 3.7-liter DOHC 24-valve V6 engine which contributes to a power of 332 hp, and a 6-speed manual transmission gearbox. Its body is lower and wider, which makes it an appropriate choice for a sports car. The car best responds to aerodynamics, owing to its comprehensive underbody airflow management system, and has a sturdy suspension. Nissan uses the Vehicle Dynamic Control (VDC) for road safety of this car. The 370Z is priced at around $31,000.

The Mitsubishi Lancer Evo GSR does make its place as one of the top 10 most affordable sports cars. Be it rally or street racing, the Evo takes the road pretty nicely. It is believed to be a typical sports machine that is incorporated with a 291-hp turbocharged 2.0-liter DOHC MIVEC engine. Adding to the thrill is the trademarked Super All-Wheel Control (S-AWC) AWD system and a 5-speed manual transmission gearbox. This valued sports car is offered at about USD 35,000 as the base price. When it comes to safety, Mitsubishi incorporates the Active Stability Control (ASC) working with Sports ABS and Electronic Brakeforce Distribution (EBD).

The Porsche Boxster is more expensive than any other car in the list costing USD 51,000 upwards. This mid-engine rear-wheel drive car has a 2.9-liter 6-cylinder engine which delivers 265 – 330 hp. A 6-speed manual gearbox comes with the base trim package. Technologies such as Porsche Stability Management (PSM) and Porsche Active Suspension Management (PASM) give the driver a safe and smooth drive. In addition to all these, this car is lightweight which aids in proper handling and reduced fuel consumption.

These are the ten best affordable sports cars of 2015. Engine upgrades and paint job customizations matter a lot when it comes to making a standard car a true sports automobile. Earlier generations of most of these cars have become quite reputed for serving the sports car market for decades. Good examples can be the Mustang, Camaro, and Charger. I hope the above list of affordable sports cars would help you in choosing the best car.