The alternator is the power generator of the car. All electrical and electronic accessories, as well as the engine is dependent on it for their power requirement. Problems associated with this car part have a nasty reputation of going undetected, until it's too late.

The alternator is the power generator of the car. All electrical and electronic accessories, as well as the engine is dependent on it for their power requirement. Problems associated with this car part have a nasty reputation of going undetected, until it’s too late. 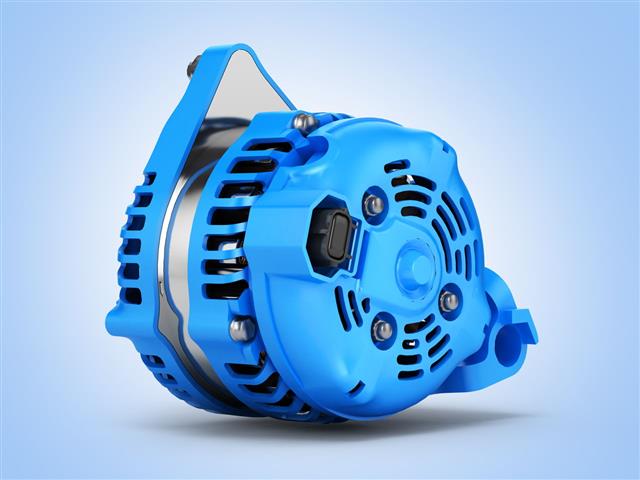 Modern cars, trucks and caravans are well-equipped with every comfort one can imagine. All these appliances and the engine need loads of electric power to operate. Where does all this power come from? This requirement is satisfied by a very simple gadget, known as the ‘Alternator‘. It is short for ‘Alternating Current Generator‘. The efficiency of these devices is around 50 – 60%. Through the use of the alternator, which is a dynamo, your car generates its own electrical power and stores it in a rechargeable car battery. Ergo, it’s absolutely essential that you keep a check on the working of the alternator or you may be left high and dry with no power to drive your car!

How Does the Car Alternator Work?

The alternator creates electricity by exploiting a fundamental law of electromagnetism which is – ‘Changing magnetic field creates an electric field‘. There are two important parts of the alternator – stator and the rotor. The rotor is essentially a set of three pairs of electromagnets with opposite poles facing each other, placed on a cylindrical disc. They are 120 degrees out of phase from each other. Stator is the stationary part placed at the center of the rotor disc.

The rotor is attached to engine crankshaft, by a belt. Thus, an important part of this assembly is the alternator belt, which transfers engine torque to the rotor. When the engine is operational, crankshaft rotation makes the rotor go around. The revolving rotor creates a changing magnetic field. This field induces a three phase current in the central stator. A current is generated 120 degrees out of phase, by each of the magnet pairs. There are output terminals attached to the stator with separate windings for every phase.

However, this output current is AC (Alternating Current) but the car accessories require DC (Direct Current) for operation. Therefore, AC to DC conversion is achieved by connecting the output current from stator to a double bridge rectifying diode circuit, which effectively does the job. So, one car alternator with such three sets of magnets generates a threefold current which is 120 degrees out of phase. The total voltage output of the alternator is around 14 V typically.

The DC output from the rectifier is fed to the battery which gets charged and it effectively ‘stores’ the generated electricity. For operating the electromagnets in the alternator, a voltage needs to be supplied from the battery at the start which is called ‘exciter’ voltage. The whole alternator assembly is supported by bearings for smooth rotation. Thus, chemical energy of the gasoline in your tank is converted into electrical energy, by an alternator.

Any piece of electromechanical equipment is bound to breakdown at some point, if not maintained properly, due to the constant frictional forces. The car’s alternator is no exception to this. Keeping a tab on the performance of your car alternator and maintaining it is a simple job. Here’s an essential guide to troubleshooting alternator problems effectively. If your car’s headlights go dim often and electrical accessories experience problems, it’s but natural to suspect alternator issues. Here’s how you can go about diagnosing and solving problems.

Observe the front panel of your car and see if a light marked as ‘ALT’ is glowing on the dashboard. If this LED is glowing, it’s a direct indication that the alternator output voltage has dropped substantially. It’s imperative that you test the alternator immediately.

The alternator has three operating stages, with each providing a certain voltage output. Therefore even if one stage or two stages fail, you may not notice, as some amount of voltage output is still charging the battery. Also, if you are not putting a lot of load on the battery, and all three stages have failed, still the car can operate on the reserve charge in the battery. This makes it difficult to diagnose whether source of the problem is the alternator.

The way to check out this problem and take care of it is quite simple. Set the engine on idling mode and check the voltage between the output terminals of the alternator by using a digital multimeter set on the voltage mode. If it has fallen below the maximum of 14 V, then there may be a stage failure. In case it’s indeed maximum at 14 V, check if it remains stable after you apply more load like the air conditioning. If it’s not remaining stable, you can be assured that the alternator is in need of repair. Test the battery output voltage too, as sometimes it’s a dead battery that’s the culprit.

Check the Functioning of Electromagnets

Check if the electromagnets are operational by seeing if metal objects get attracted towards the alternator. Then check for unusual rumbling noise from the alternator. It may indicate that the bearings are wearing out. In that case, you may need to replace them soon. Check the rotor belt as it may slip or break. Replacements are easily available at your neighborhood car accessories store.

A worn out or slackened alternator belt may be the reason for the alternator’s low voltage output. Open the hood and observe the alternator belt’s condition, along with its tension. If it’s worn out, get it replaced. In case it has lost tension, get your car to the nearest car repair center to get the belt tension adjusted precisely.

A very common reason for problems in the working of most electrical devices is ‘Loose Wiring’. Check for loose connections that might be hampering the functioning of the alternator. Fixing them might restore functionality to normalcy.

Last but not the least, have a tried and trusted mechanic by your side for expert advice in case the symptoms of the problem go beyond your understanding. Always try to understand the solution of a car problem if it crops up, even if the mechanic solves it for you. Trust me it always helps and comes to your aid, when you are on your own.