Understanding the Primary Difference Between Main and Rod Bearings

The primary differences that come up in a rod bearings vs. main bearings comparison is their location and function. WheelZine gives you the complete comparison between these types of engine bearings, to help understand their purpose better. 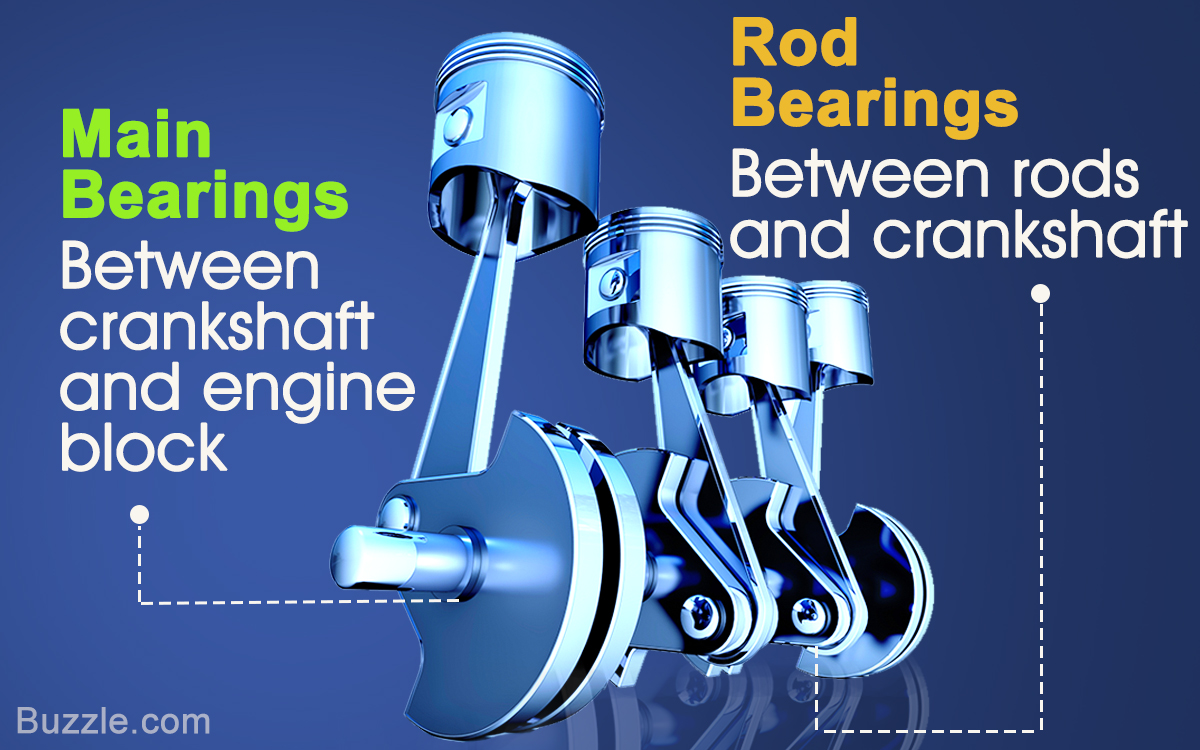 The primary differences that come up in a rod bearings vs. main bearings comparison is their location and function. WheelZine gives you the complete comparison between these types of engine bearings, to help understand their purpose better.

Engine bearings are made of layers of different metals, with some layers even thinner than one-thousandth of an inch.

An engine has several moving parts connected to one another, such as rods and pistons. To prevent the connected parts from wearing each other out, they need to be lubricated. This lubrication is provided by inserting bearings between surfaces, which rub against each other. Such bearings can be either of a split-sleeve or anti-friction type.

Split-sleeve bearings are a circular shell made of two halves which fit into each other. Lubrication is provided by a thin layer of oil between the bearing and the part it is fixed on. An anti-friction, or ball bearing, uses moving components like balls to reduce friction. However, most bearings used in IC engines are of the split-sleeve type, because the small contact area in ball bearings cannot handle the heavy stresses produced in such cases. The three main types of engine bearings are connecting rod (or rod), crankshaft (or main), and camshaft bearings. The definitions of rod and main bearings, along with the differences between them are given in the following sections.

A ‘journal’ is the surface of a connecting rod or crankshaft which is in contact with the bearing. Since there needs to be an oil layer for lubrication between the inner surface of the bearing and the shaft, oil is supplied by an oil pump to the engine block. From here, it flows into the upper half of each main bearing. This releases the oil into the crankshaft journal (surface) by a small hole, after which the oil spreads to lubricate the entire journal. This oil then seeps into the crankshaft through minute passages, that transfer it to the rod journals (surface of crankshaft in contact with rod bearing). Thus, oil first flows into the main bearings, and then into the rod bearings.

Being of the same split-sleeve type, both, rod and main bearings are made of similar materials. While most of the material used is steel, to impart strength, other materials like a copper-lead-tin alloy (known as ‘babbitt’), nickel, white metal, or aluminum are added to ensure that the bearing is also soft enough not to damage the shaft. However, rod bearings are smaller than main bearings in every engine.

Since each piston has one rod bearing, the total number of bearings in an engine depends on the number of cylinders. In case of main bearings, most small engines have two bearings, one at each end of the crankshaft; while others have more, one between two adjacent crankpins.

Increasing the number of main bearings on a crankshaft helps it handle the flexing effect of the connecting rods better, and contributes to engine stability. However, additional main bearings need a longer crankshaft, which increases its inertia.

The above comparison indicates the importance of these bearings in engine performance. For this reason, one should keep an eye out for any symptoms of a faulty bearing, such as strange noises, poor performance, and a glowing MIL lamp.