Understanding the Purpose of an Intake Air Temperature (IAT) Sensor

An Intake Air Temperature (IAT) sensor is essential for good engine performance and fuel economy. But what does this IAT sensor actually do? WheelZine answers this question, along with telling you about the location, working, and problems of an IAT sensor. 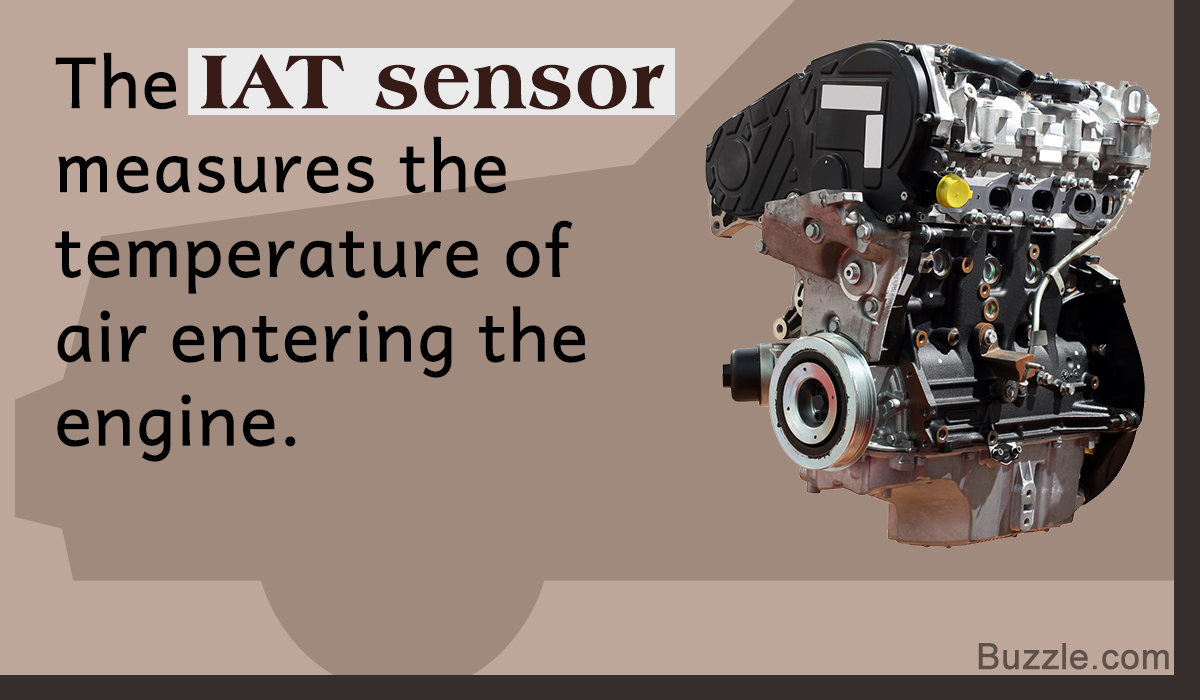 An Intake Air Temperature (IAT) sensor is essential for good engine performance and fuel economy. But what does this IAT sensor actually do? WheelZine answers this question, along with telling you about the location, working, and problems of an IAT sensor.

It is possible to modify the IAT sensor by plugging an additional resistor, called a ‘chip’ to it. This tricks the ECU into thinking that the incoming air is cooler than it actually is, making it pump more fuel into the engine. The result is enhanced engine power.

The Intake Air Temperature sensor is commonly integrated with the Mass Air Flow (MAF) sensor, and is found in the air intake passage below the hood. This is a resistance-based sensor, which correlates the temperature of the incoming air with the magnitude of resistance, and relays this information to the car computer. The car ECU then decides the rate at which sparking and fuel injection takes place in the engine, to get the most out of it. This helps the engine start well on a cold day, and maintains fuel economy in warm weather.

When the IAT sensor gets damaged, this is indicated by a variety of driveability symptoms, such as poor idling, backfiring, and unexplained surging. So when the ‘check engine’ light goes on, it is vital to know if a damaged IAT sensor is the real culprit. Since the sensor is in a solid state, no adjustments can be made to it, but it can be cleaned, or if necessary, be replaced to solve the issue. The purpose, location, working, and problems of the IAT sensor are explained here.

What does an IAT Sensor do?

The IAT sensor measures the temperature of air that enters the engine. This helps the Electronic Control Unit (ECU) of the vehicle to modify the air-fuel ratio that is injected into the combustion chamber of the engine, for its proper functioning. This is because, the change in temperature of the air changes its density, affecting the concentration of oxygen molecules per square inch. Cold air is denser than warmer air. Thus, cold air requires more fuel to be injected into the combustion chamber to maintain the air-fuel ratio. This information is then used by the ECU to modify the rate of fuel and spark delivery.

An IAT sensor is also used by automatic climate control systems in vehicles. One sensor is used to monitor the temperature of air inside the passenger compartment, while another measures the outside air temperature.

Location of the IAT Sensor

A standalone IAT sensor is located between the air intake box and the throttle body in the air intake passage of most vehicles. The sensor may be threaded onto the inlet manifold, in which case, it is called a Manifold Air Temperature (MAT) sensor.

The IAT sensor may be incorporated into the Manifold Absolute Pressure (MAP) sensor, when the latter is fitted on the inlet manifold. This can be identified by the presence of four pins, as the MAP sensor requires only three. The fourth pin is shared by the IAT sensor to complete its earth connection.

The IAT sensor may also be integrated with the Mass Air Flow (MAF) sensor, which may or may not be indicated by the presence of more than 3 pins.

The IAT sensor is a thermistor, which is a type of resistor that changes its resistance value with the change in temperature. The ECU passes a current of 5 volts to the sensor, and monitors the voltage that is returned to it.

Most sensors are Negative Temperature Coefficient (NTC) thermistors, in which the resistance value decreases with an increase in temperature. Warm air will lower the value of the sensor’s resistance, causing a high voltage pull-down across the ECU, which is interpreted by the car computer as the effect of warm air.

On the other hand, cool air increases the resistance value of the sensor, which causes a low voltage pull-down across the ECU, which the computer interprets as the effect of cool air. Due to this, the ECU increases the fuel injection volume during cold engine operation, so as to improve performance.

Some IAT sensors are Positive Temperature Coefficient (PTC) thermistors, though such sensors are rarely used. When these sensors detect warm air, their resistance increases in magnitude and cool air decreases their resistance value. These changes in resistance affect the voltage returned to the ECU in different ways, causing it to modify the air/fuel ratio.

The IAT sensor may lose its sensitivity due to long-term use or high temperature. Carbon and oil deposits in the intake manifold may cover the sensor tip, reducing its responsiveness. A shorted electrical connection, proximity to high voltage equipment, and corrosion of electric connectors, can all reduce or even destroy the sensor’s ability to detect minute changes in air temperature. A shift in the sensor position or backfire in the intake passage may cause similar problems.

These issues can cause incorrect signal transmission to the ECU module, leading it to misunderstand the situation. The computer may think that the air is warmer or cooler, when the opposite is true, resulting in poor engine performance. The driver might experience poor idling quality when the engine is cold, and surging when warm. If the computer incorrectly thinks the air is cold, it may deliver a rich air-fuel ratio, which can lead to fuel wastage, as more fuel is injected unnecessarily. On the other hand, if the ECU delivers a lean air-fuel ratio, miscalculating that the air is warm, it can lead to the engine misfiring. A defective sensor can be indicated by a glowing Malfunction Indicator Lamp (MIL).

A damaged IAT sensor can be detected by measuring its resistance using an ohmmeter, after removing it from its housing. Air of different temperatures can then be blown at it using an air gun or blower, and the resistance values should be checked with the standard values given in the user manual. If the measured values don’t tally, then the sensor may be damaged. Sometimes, cleaning with an aerosol solution or removing carbon deposits can improve its sensitivity. If the resistance values are the same as the standard, some other component may be the culprit. However, IAT sensors are easily available, and are relatively inexpensive, at less than $30 on average, making replacement easy. If the MIL light still glows even after sensor replacement, there might be an issue with the car computer.

What the IAT sensor does is, it helps the ECU modify the timing of sparking and fuel injection to the engine depending on the temperature of the entering air. When replacing a defective sensor, one thing to keep in mind is not to tighten it too much, as this can damage the sensor’s housing or threading.