The Basics of Stroker Engine Explained

A stroker engine is basically a regular stock engine that is customized to provide increased torque. This WheelZine article explains some of the basic concepts associated with the functioning of a stroker engine. Take a look!

A stroker engine is basically a regular stock engine that is customized to provide increased torque. This WheelZine article explains some of the basic concepts associated with the functioning of a stroker engine. Take a look!

Displacement is calculated using the bore and stroke of an engine. A better bore (cylinder diameter) leads to increased horsepower. On the other hand, a better stroke produces more torque.

Before moving towards the aspect of a stroker engine, it’s essential to understand the functioning of an engine as a whole. A typical car engine has around 350 moving parts, some of the most important ones include, the crankshaft, cylinders, pistons, fuel jets, and spark plugs. In a regular four-cylinder four-stroke engine, there are four pistons, each of which completes a cycle of four separate strokes. A stroke refers to the motion of a piston across the full length of the cylinder in either direction.

Let’s see how a single piston functions in its respective cylinder of a petrol engine. A stroke begins with the piston being at top dead center of the cylinder. It then descends creating volume as a mixture of gasoline and air enter the cylinder through the intake valve. In the next stroke, the piston elevates from bottom dead center to its primary position while it compresses the gasoline-air mixture in the cylinder head. In the third stroke, when the piston is at the top, the spark plug ignites the compressed gas resulting in immense pressure forcing the piston back down. Finally, the combusted material from the burnt gas escapes via another valve as the piston returns back to the top dead center. This completes a cycle.

In this way, all the four pistons function to keep the engine powered up and roaring. But, how is a stroker engine different from a regular engine? Let’s find out.

What is a Stroker Engine?

A stroker engine simply aims at increasing the engine’s stroke, or the distance covered by the piston. This is achieved by using a crankshaft in which the position of the crank pin is further away from the center of axis of the crankshaft’s rotation. This increases the displacement of the engine and generates better torque, improving acceleration and resulting in the faster rotation of the wheels of a vehicle.

As discussed earlier, stroke refers to the distance covered by a piston from the top dead center to bottom dead center of the cylinder. Stroking basically means increasing the piston’s distance covered. Let’s see some of the ways to achieve this. A little expensive alternative can be increasing the height of the block deck, or the cavity in which the cylinders are contained. This can be done by purchasing aftermarket block decks customized for stroker engines.

The second way is to extend the length of the rod connected to the piston, this would enable the piston to rotate across a larger diameter. However, simply increasing the rod length would cause it collide with the cylinder head. To avoid this, special aftermarket pistons are available, which feature the extended rod connected higher within the piston itself. Take a look at the image given below to get a better idea. 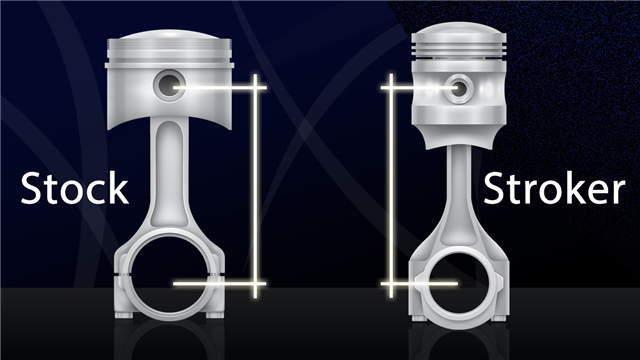 Notice the connecting rod extended higher within the piston in the image on the right.

The third and final way is to purchase a stroker kit from an aftermarket store. Some stores even assist in the assembling of the kit. Stroker kits usually comprise a crankshaft, connecting rods, pistons, piston pins and rings, main bearings and rod bearings.