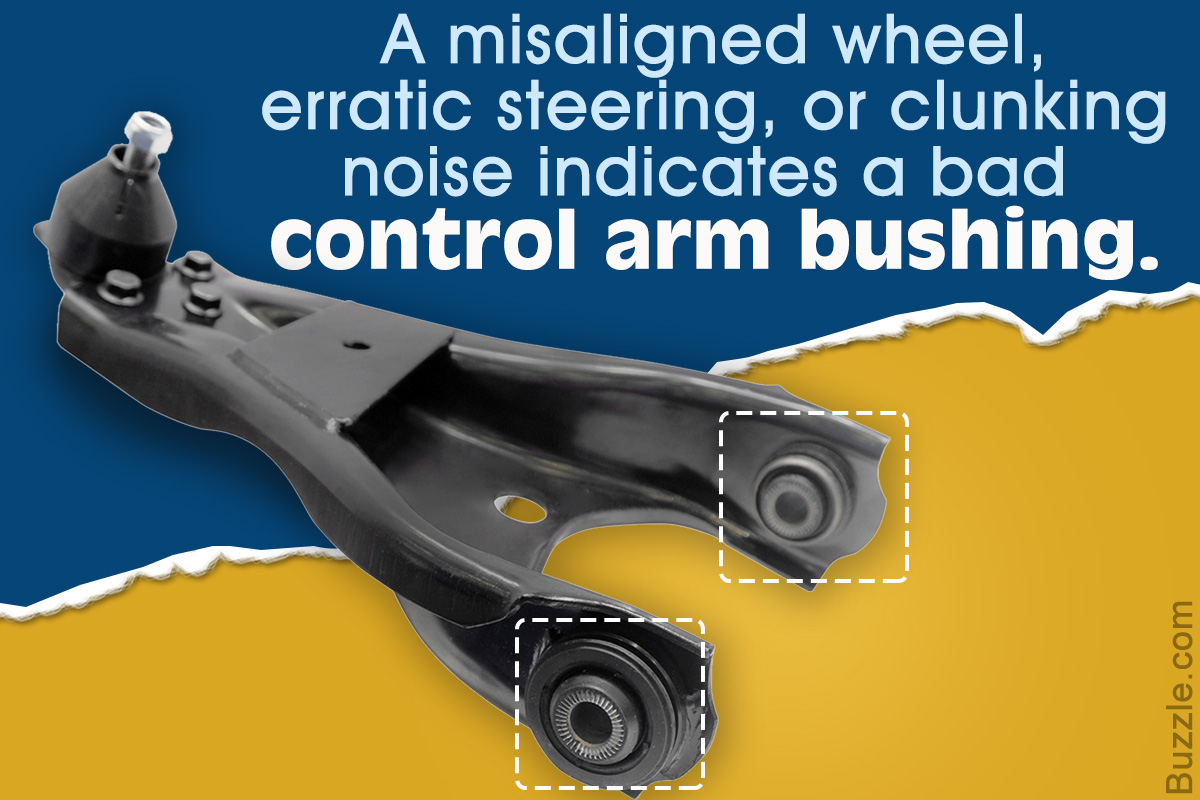 Control arms have been used in automobile suspensions for close to a century.

Most people consider a vehicle’s entire suspension system as ‘one’ part. The fact is, it is made up of several components which play different roles. One such component is the control arm, which is mostly found in the front wheels, though some trucks and cars have it in the rear ones too. It connects the front suspension of the vehicle to its frame. There are two control arms in the suspension―upper and lower―and they contain a rubber bushing at the end. This is made up of a rubber lining encased between two metal sleeves.

Such placement and compact design of the bushing is done on purpose; it helps cushion the vehicle from small bumps and vibrations, which a spring cannot. The inner metal sleeve is connected to car frame via a center bar. The outer sleeve is connected to the wheel assembly via the control arm. Thus, both the sleeves move independently from each other, and it is the rubber bushing which provides a lubrication between them. Considering that they bear a huge amount of stress with every drive, these bushings wear out pretty fast by becoming hard and cracking. Let us see how to identify a bad control arm bushing from its symptoms.

Steering problems are one of the first indications of a damaged control bushing. The steering may lose a bit of its responsiveness. At high speeds, it may even start ‘wandering’, or make the vehicle turn erratically. The driver can feel the wheel vibrate while in motion. The vehicle may start leaning to one side, to some degree, when taking sharp turns.

A bad bushing will compromise driving performance and comfort. Since the purpose of the control arm bushing is to cushion against small bumps, a damaged one will not be as effective, resulting in vibrations throughout the drive. In case of extreme damage, when the rubber bushing is completely worn out, the metal sleeves of the control arm will begun to rattle, resulting in an unpleasant ‘clunking’ noise from the front end, especially while turning or reversing. Moreover, the wheel with a damaged bushing will begin to wobble while driving.

A sudden improvement in braking efficiency can, as strange as it may seem, be attributed to a damaged control arm bushing. This is because the forward and backward oscillation of the control arm is not achieved during braking due to bushing wear. However, this effect will not be constant, making braking unstable. Moreover, when the vehicle is braked suddenly, the front end will continue to oscillate forward.

When accelerating from a static position, a backward movement will be observed in the rear end of the car, along with the problem of erratic steering, as explained above. When speeding, or taking a turn at slow pace, the steering starts trembling, and a tugging effect is observed.

Take the vehicle for a drive, preferably on an empty stretch of a freeway which allows for rapid speeding, extreme turns of the wheel, and momentarily abandoning the wheel. If you observe a clunking sound, vibrations, or wheel misalignment, then this indicates a problem with the control arm bushings. Extreme maneuvers with the steering can also be tried on a large, vacant parking lot.

A defective bushing can be checked by raising the car with a jack, or on a lifting platform, and pressing the wheel by hand. If it shows a great degree of ‘play’, meaning that if it wobbles sideways more than usual, the control arm bushing needs replacement.

The vehicle can be raised on a lifting platform, and someone can apply the brakes to stop the wheel from moving. On turning the steering from left to right, someone else can observe the axle. A damaged bushing will make the axle ‘slip’ momentarily during the turning motion.

Raise the vehicle using a jack, and using an 18″ pry bar, pry the control arm from side to side. Ideally, it should ‘spring’ back from the position it was pried to. If this doesn’t happen, and the control arm stays in its new place, the bushing is at fault. Also, observe the edges of the rubber bushing by prying aside the metal sleeve. If the control arm is not centered within the bushing, the bushing definitely needs to be replaced. A few cracks on the bushing ends are not something to worry about.

When there seems to be a problem with a wheel, raise that end with a jack and get under the vehicle. Observe the edges of the tire. If it is wearing out unevenly, either from the inside or the outside, this is due to a wheel misalignment caused by a bad control arm bushing. The central tread may also show a scuffed pattern.

Some of these symptoms can also be attributed to worn-out tie rod ends, sway bar links, ball joints, or even the control arms themselves. So, when in doubt, get the vehicle examined by a professional. Whenever a worn out bushing is observed, getting it replaced is a must. Ignoring these symptoms can result in damage to other expensive suspension components. Since these bushings tend to wear out pretty soon, auto experts agree that it is a good practice to replace them once a year.